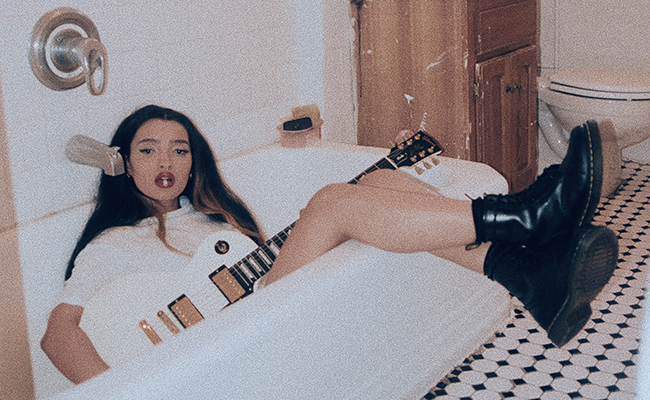 When nine-year-old Shari Silver asked her parents for a guitar, she could not have imagined the journey upon which she was embarking. At the time, she was just a kid whose love of music was nurtured by a father who not only introduced her to the music of classic rock bands like The Beatles and Aerosmith, but also took the time to tell her about the men and women behind the music. For Shari, music was a lifeline, a way to process her young emotions, giving her a sense of peace when life was overwhelming. Within this lifeline, she discovered a passion and purpose. After just a few months of guitar lessons, Shari began teaching herself new pieces by ear. Eventually, she would start quietly singing along to some of the pieces she learned, doing her best to keep her vocal ability a secret. Once they became aware of her growing musical gifts, Shari’s parents encouraged her to share it as often as possible – first at home, then eventually at a variety of area restaurants and live music venues. By the time she reached high school, was at a crossroads, finding herself having to choose between her promising career as a student athlete, a soccer player being scouted by college teams in middle school; or the promise of a life in pursuit of her passion, a dream which her earliest performances had now made a reality.

Over the next four years, Shari and her mother leveraged their personal connections to create opportunities out of every possible circumstance. “There were no real opportunities where I grew up, you kind of have to go after them,” Shari says of her Coral Springs, FL upbringing. “My mom would just go through a notebook of people she knows and reach out to see who could point us in the right direction. That actually opened even more doors than me playing around the city.” One of those doors lead to a Miami-based indie label which had had a significant amount of success in the Hip-Hop world. Shari signed her first record deal as a multi-instrumentalist, a seasoned singer/songwriter, and an artist beginning to understand the musical legacy she wanted to create. Unfortunately, she quickly learned that, despite the label’s best intentions, they didn’t have the resources to take her to the next step in her journey. “The label arranged for me to showcase for Epic Records,” Shari says. “I was the only artist that showed up with a guitar, speakers, etc. The only one with a full set up. After my set, one of the A&amp;Rs, Sickamore, told us that he was very impressed and wanted me to participate in a bigger showcase in L.A. ‘But first, you guys have to record these songs,’ he said. And my label didn’t know who to reach out to to make that happen. That’s when I knew this wasn’t gonna work.” Already feeling defeated, things took a turn for the worse when a previously undiagnosed health condition led to Shari losing her voice. It took nearly a year, countless doctor’s visits and treatment trial-and-error for her to recover, learning healthier habits along the way. But by the time it was all over, Shari was spent, wondering if the dream she’d pursued her entire adolescence was truly meant to be.

As she sat with her mother, trying to make sense of it all, a serendipitous phone call came in: a friend of her mother’s connected them to multi-platinum producer Needlz. Shari hesitantly agreed to “one last meeting,” before walking away from music forever. The rest, as they say, is history. “I can’t tell you exactly how I knew this would be a good fit, but I knew right away,” Shari says. “She came to us with so many important factors already in place,” adds Needlz, “not only in terms of talent and artistry, but also her personality and dedication to her craft. We’ve spent the last two years polishing her raw talent and I’m really excited to introduce her music to the world. There’s really no other artist in the marketplace
quite like her.”

That introduction to the world comes with the release of Shari’s debut single “Little Heart,” which opens with a deceptively sweet intro, before giving way to an edgy hook and allowing the newcomer to flex her vocal chops and versatility over a trap/pop beat. Like all of her growing catalog, “Little Heart” effortlessly delivers authenticity. That ease is Shari Silver in a nutshell, capturing all of the influences and experiences that have made her who she is, to create music that is at once relatable and uniquely true
to herself.